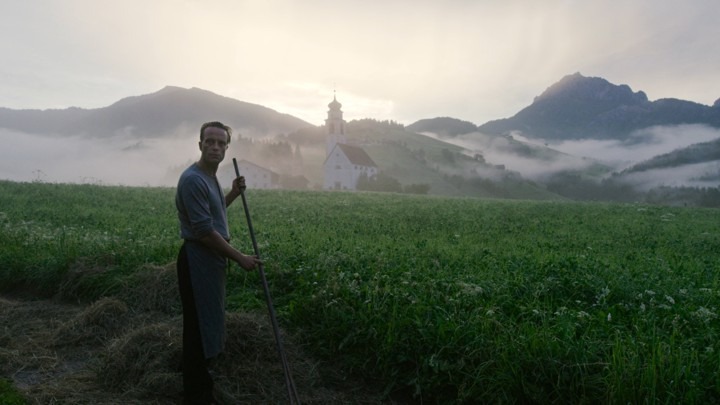 Terrence Mallick’s A Hidden Life is a story of a man who is unlike any man that I know. He is a man who is unwilling to sit in judgment of others knowing that it will cost him his life. Which it does.

As I watched this long, slow film, I thought about how we live in a time where people are tried and convicted in the court of public opinion. They are prosecuted for having ideas that are not approved by people who are the arbiters of public opinion. They are judged to be immoral or a threat to the established social order. In the small mountain village that Austrian farmer Franz Jägerstätter and his family live in, he is tried and convicted first by his neighbors for not joining the Nazi cause. Then he is arrested and prosecuted for not affirming loyalty to Adolph Hitler.

Yet, the film does not glorify political protest. Franz isn’t a character out of our contemporary world. He isn’t a political activist. He doesn’t take a public stand against National Socialism. His issue is personal, kept to himself, and within his family. Today, he would be considered a coward, not a man of principle. He would be a man to be doxed and humiliated in the arena of public opinion.

Frans Jägerstätter tells one of the judges at his military tribunal that he does not know if he has done the right thing. He only knows that he could not do what everyone else believed he should do. He pays the price for following his conscience.

I have friends who hate Donald Trump and those who love him. I know people whom I respect who believe he should be removed from office. They tell me that he is an immoral man. This is their reasoning for his removal from office. I wonder by what standard are they judging him. Why do they treat this man differently than every other politician? Why now? Are they making a similar judgments about other politicians believing that they are moral? Ostracization is a form of scape-goating. In doing so, it relieves people of their responsibility. It is an age-old practice whose purpose is to return the social order to its accepted norm.

Ultimately, I find the rationale troubling. Not because I am a fan of Donald Trump, but rather because I believe that judgment of a president should be based upon the rule of law, not the court of public opinion.

I then wonder if they look upon their spouse or the pastor of their church or their next-door neighbor in the same way. Is moral judgment the currency of social acceptance today? If so, then what are the criteria for judgment? And are we subject to the same scrutiny?

When the court of public opinion replaces the court of law, we find ourselves in the same position that the people of Frans Jägerstätter’s Austrian village found themselves in. Tow the accepted line of belief. Sacrifice your freedom of conscience for the greater good. This is the cul-de-sac that moral righteousness ends in.

A Hidden Life tells a story of a man whose faith places him at odds with the world around him. He seeks to live out the admonition of Jesus who said, “Judge not, lest you be judged.” The judgment of Franz Jägerstätter was not by the Nazi court. Instead, it was a judgment that he imposed upon himself. A judgment that would not allow him to cross a line. And so, he lived his life as an alien in the village where he lived and died as a man free in the knowledge that he did not compromise his conscience. The price was costly to him, and to his family.

Malick’s story contrasts two contemporary moral perspectives. Franz acts from a consideration of his personal conscience. The other is that of the town’s people, his lawyer and the members of the Nazi tribunal. Their perspective is the belief that Jägerstätter was acting to change something external to himself. Their perception is that resistance was a political act, not a personal one, intended to affect change in the culture. It is clear that Franz Jägerstätter had no expectation that his act of resistance would impact the war or the Nazi regime.

The question the film provokes in me is whether it is possible to live a public life today without compromising one’s freedom of conscience. Is it possible to not have a public position about Donald Trump’s moral guilt or innocence, for example? Is it possible to participate in the public world of social media without simply drawing lines of judgment towards people? It is a question that I believe is worth each of us asking of ourselves if we believe that freedom of conscience is worth preserving. Like Franz Jägerstätter, not knowing what is the right thing to do maybe our best hope for discovering what is.