“If we live in a state of constant fear, can we remain human?” 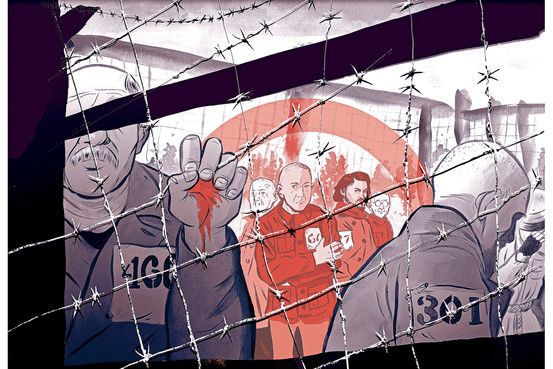 We are living in a new age of fear.

Fear of the unknown lurking in the next email or Tweet.

The following post was first published November 2009 at the Leading Questions weblog.

It speaks to a different kind of fear that was known by millions during the 20th century, and remains a type of fear that many in our time still have.

Solzhenitsyn scholar and biographer Edward Ericson describes the central message of the novel in his review.

When faced with the moral dilemma of what to do about the stunning secret that has fallen into his possession, Volodin asks himself, “If we live in a state of constant fear, can we remain human?” He exchanges the potentially self-indulgent principle that “we are given only one life” for the consequential principle that “we are given only one conscience.” His action establishes the ideal of “humanity,” and thus sets the bar by which all the novel’s characters are judged.

Reviewer David Mahoney describes the change of moral perspective that Volodin has.

Volodin is an even more interesting and weighty character in the new version. In both versions, he moves from being a privileged, carefree, and cosmopolitan member of the Soviet elite to being troubled by a growing aversion to the regime he had hitherto served without qualms. A crucial flashback in “But We Are Given Only One Conscience, Too,” one of the most important chapters, reveals the inner transformation that led to his estrangement from his wife, the daughter of the public prosecutor in Moscow, and his decision to make the life-altering phone call.

Too nervous to attend a party at the home of his in-laws a mere twenty-four hours after the call, he reflects on the first six years of his marriage where “no inhibitions, no obstacles” were allowed to “come between wish and fulfillment.” Eager “to sample every new, exotic fruit,” he and his wife have as their motto an Epicurean one (at least in the vulgar sense): “We are given only one life!”

In his sixth year of marriage, he had reached a dead end. The life of endless novelty and material pleasure began to “disgust” him. His soul was ripe for self-examination. One day he “had the amusing idea of reading what his ‘master’ had in fact taught.” Searching through his late mother’s cabinets he found not only a book of Epicurus’ sayings but also her letters and diaries.

He had always admired, even idolized, his father, a revolutionary naval officer who had been killed in 1921 repressing an independent peasant rebellion in Tambov province. He discovered that his “bourgeois” mother had thought deeply and widely about matters”“Truth, Beauty, Goodness, the Ethical Imperative””that had no place in the “progressive” Soviet world that had shaped his soul. “Something he had lacked””a moral anchor, a principled point of view”was “stealing into his heart.”

His discovery of the moral law (in his mother’s words, “Injustice is stronger than you . . . but let it not be done through you”) led him to rethink the claims made for the Bolshevik revolution. His work as a “diplomat””the secret meetings, the code names, the passing on of instructions and money”began to seem sordid, distasteful, repellant.

In some of the most important words of the book, Solzhenitsyn writes: “The great truth for Innokenty used to be that we are only given one life. Now, with the new feeling that had ripened in him, he became aware of another law: that we are given only one conscience, too. A life laid down cannot be reclaimed, nor can a ruined conscience.”

Here, with the full force of his art, Solzhenitsyn chronicles the “existential” recovery of those elemental moral experiences that give evidence of the moral law and that give the lie to every ideological denial of the soul’s connection to goodness and truth and its responsibility before them.

Solzhenitsyn, today, is largely unknown in the United States. However, in the 1970s and 80s, he was a notable voice both against Soviet Communist totalitarianism and passivity towards the liberty and freedom of people under tyranny. In his famous Harvard University Commencement speech in 1978, he spoke,

A decline in courage may be the most striking feature that an outside observer notices in the West today. The Western world has lost its civic courage, both as a whole and separately, in each country, in each government, in each political party, and, of course, in the United Nations. Such a decline in courage is particularly noticeable among the ruling and intellectual elites, causing an impression of a loss of courage by the entire society. There remain many courageous individuals, but they have no determining influence on public life. Political and intellectual functionaries exhibit this depression, passivity, and perplexity in their actions and in their statements, and even more so in their self-serving rationales as to how realistic, reasonable, and intellectually and even morally justified it is to base state policies on weakness and cowardice.

The United States and the former Soviet Union were worlds apart in attitude and culture. Yet the people who inhabit both worlds were then, and, are today, human beings who live each day within a similar moral universe. We live with fear and guilt over the inner conflict as our personal consciences beg us to live with honesty and integrity. Solzhenitsyn faced this truth and came to terms with it during his eight years in the Soviet gulag.

The question that Solzhenitsyn’s raises for us is “What does it mean to be human?” It is a question that remains an important one for our time. For many writers like Solzhenitsyn, the answer lies in how we live under fear, tyranny and oppression. It is something that most of us in the West have never experienced as he did. He wrote in The Gulag Archipelago,

“Every man always has handy a dozen glib little reasons why he is right not to sacrifice himself.”

It explains the passivity and lack of courage to act morally. He also writes,

“You only have power over people as long as you don’t take everything away from them. But when you’ve robbed a man of everything, he’s no longer in your power–he’s free again.”

Over past few months, the subject of fear in the workplace has come up, in conversation, often. Workplace fear has more to do with not knowing what the future holds, instead of an oppressive state administration imposing rule over a person’s conscience.

No character is more radically altered from one version of the novel to the other than Volodin. In the shortened book, he is a jaded young member of the privileged Soviet elite. In the full version, he is a young functionary whose moral evolution leads him to commit treason against the regime of which he is a part. Readers are left to ponder, along with him, the ethics of betraying the worst sort of regime—a variation on the age-old theme of the legitimacy of tyrannicide.

While we don’t have designated political prisons* in the United States, the fear of speaking counter to the current political fashion is nonetheless real.

The challenge for each of us is to know the values that form our conscience, and live by them. With the integrity and confidence that comes from doing so as the right kind of counterweight for our lives, we also gain freedom as individuals. It is the moral freedom to choose between right and wrong, good and evil, that is the marker of our human nature.

Let me close with these words of Solzhenitsyn from The Gulag Archipelago,

“Own only what you can always carry with you: know languages, know countries, know people. Let your memory be your travel bag. Use your memory! Use your memory! It is those bitter seeds alone which might sprout and grow someday.”

“Look around you–there are people around you. Maybe you will remember one of them all your life and later eat your heart out because you didn’t make use of the opportunity to ask him questions. And the less you talk, the more you’ll hear. Thin strands of human lives stretch from island to island of the Archipelago. They intertwine, touch one another for one night only in just such a clickety-clacking half-dark car as this and then separate once and for all. Put your ear to their quiet humming and the steady clickety-clack beneath the car. After all, it is the spinning wheel of life that is clicking and clacking away there.”

“If only it were all so simple! If only there were evil people somewhere insidiously committing evil deeds, and it were necessary only to separate them from the rest of us and destroy them. But the line dividing good and evil cuts through the heart of every human being. And who is willing to destroy a piece of his own heart?”

“Gradually it was disclosed to me that the line separating good and evil passes not through states, nor between classes, nor between political parties either — but right through every human heart — and through all human hearts. This line shifts. Inside us, it oscillates with the years. And even within hearts overwhelmed by evil, one small bridgehead of good is retained. And even in the best of all hearts, there remains … an uprooted small corner of evil.

Since then I have come to understand the truth of all the religions of the world: They struggle with the evil inside a human being (inside every human being). It is impossible to expel evil from the world in its entirety, but it is possible to constrict it within each person.”

Additonal quotes Solzhenitsyn’s The Gulag Archipelago can be found here.

An excerpt from chapter one of In The First Circle is available here.

*In the decade since this was posted, this question is now a prominent one in political circles.