The Two Global Forces face off in Hong Kong 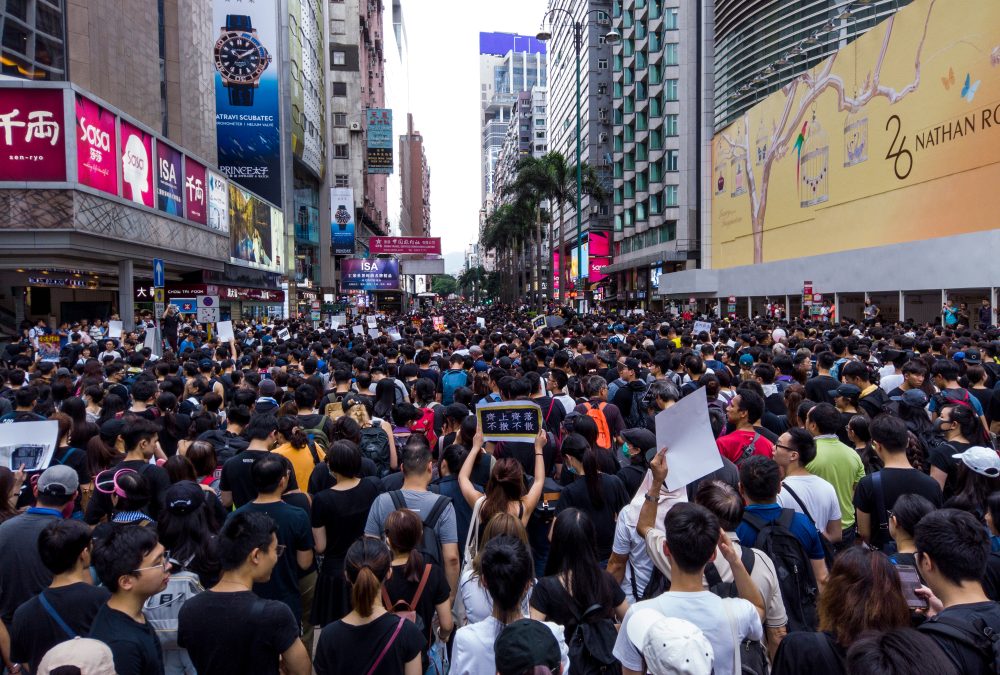 A fish can’t describe what water is like. It is their total living environment.
The same is true for human beings in seeing how organizational structures affect them.
This experience changes, however, when the environment becomes unhealthy.

Two global forces are at work … pushing and pulling against each other. The first is the pull to centralize global institutions, particularly those in finance and governance, into one integrated system of operation. This is the apex of the 20th-century hierarchical organization, where centralized control for planning and management efficiency is a prime organizing principle.

The other force pushes back through networks of relationships that distribute decision-making and management in a decentralized way. The scale and spread of global collaboration through networks of individuals is solving problems in the developing world, which a generation ago was not possible.

The Two Global Forces describe a transition that is unprecedented in human history. The transition is from hierarchy to networks. It is emerging through two developments. The obvious one is how personal technology provides people the capacity for independent action like never before. The second is a growing awareness of a detrimental impact that organizational hierarchy is increasingly having upon human experience.

An illustration of this historic transition is taking place in Hong Kong. Protesters are daily demonstrating against the Chinese Communist government in Beijing over its treatment of Hong Kong’s citizens. The protesters represent a force of decentralization against the highly centralized government of China.

The seven tactics are simple and designed to bring international pressure on the Beijing government to change their treatment of the citizens of Hong Kong.

1 Be Water!
The goal is not to occupy, but to flow throughout the various districts of Hong Kong. The effect is to avoid direct confrontation while sharing their concerns with the world.

2 Open Source Protest
There are no designated leaders or followers. Titles and organizational roles represent organizational hierarchy. Leadership by one’s own acts presents how decentralized networks of relationships function.

3 AirDrop
Because traditional communication technology is subject to surveillance and interruption by the government, communication is happening through people’s physical proximity to one another. AirDrop is a technology embedded in Apple iPhones that allows for the exchange of images and information using Bluetooth technology. All social media apps are dependent upon centralized operational structures. Regardless of the app, they are not directly person-to-person but rather mediated communication controlled by their companies. AirDrop provides a direct experience of person-to-person interaction that allows information to flow quickly through the crowds of protesters.

4 Supply lines and sign language
At the link to Dapiran’s story, there is a picture of hand gestures used to communicate amid the protests. Each person becomes a node in the network of communication that maintains the connection between hundreds of people gathering together. The responsibility to communicate is shared as a collective body of people. This is how networks of relationships communicate.

5 Neutralizing tear gas
The protesters operate as a network of direct relationships. An aspect of their connection is that they are a learning community. How protests that have taken place over the past decade have continued to change in response to government action. This has led to the decentralization of the leadership of the protests and dispersal of responsibility to all participants. As a result, innovations can come from any source within the network of protesters. How to neutralize tear gas is just one of those innovations.

6 Avoiding a stampede
In an environment of a few leaders and many followers, it is easy for leaders to lose control of the crowd when danger comes close. However, in a network environment, each person acts both as leader and follower which is the pinnacle of collaboration.

7 Revolution crowdfunding
Crowdfunding is a decentralized methodology for raising funds. The appeal is to individuals to contribute. There is a fragility that many organizations feel when they are dependent on large funders. Small gifts distributed across a widely dispersed network provides a safer source of support.

Michael Yon, an experienced war correspondent, has been live-streaming the protests from the streets in Hong Kong. His videos provide an immediate sense of context for Anthony Dapiran’s article.

The Meaning of This Transition

The Two Global Forces of centralization and decentralization do not represent separate methods of organization. Rather, they are two poles along a spectrum of organizational structure. This is true for local business as well as global ones. The more freedom and autonomy to take leadership initiative a business gives to its people, the greater potential the business has for fulfilling its potential impact. This is the power that decentralized network of relationships bring to local communities and hierarchical organizational structures.

The Hong Kong protests are local community demonstrations. It presents a picture of the local impact of the Two Global Forces. The centralization of governance and finance has brought about a global concentration of wealth and power. The Hong Kong protests focus on the tension that exists between the centralized control of Beijing and the growing hardships that Hong Kong people feel socially and economically.

The global reality is that politicians from both the left and right, as well as advocates for global capitalism and democratic socialism, all believe in the centralized institutions of global finance and governance. It is the source of their wealth and power. The only difference is in the aims that their systems of control are intended to produce. In watching the protests in Hong Kong, it is important to understand that the political context of the Two Global Forces is not left and right, but rather between the systems of control and freedom.

At a Point of Change?

The Hong Kong protests show the fragility of centralized systems of control. It requires a complacent electorate or workforce. In Hong Kong, a point of change has begun as its citizens are no longer complacent.

Many local business people already understand that the sustainability of their enterprise is dependent upon the quality of the people who work with them. The Circle of Impact becomes an essential tool to develop the leadership capacity of people. The tactics of the Hong Kong protesters illustrate how a community of people can learn to create an environment in opposition to the restrictive control where people are free to fulfill their potential for impact where they live.